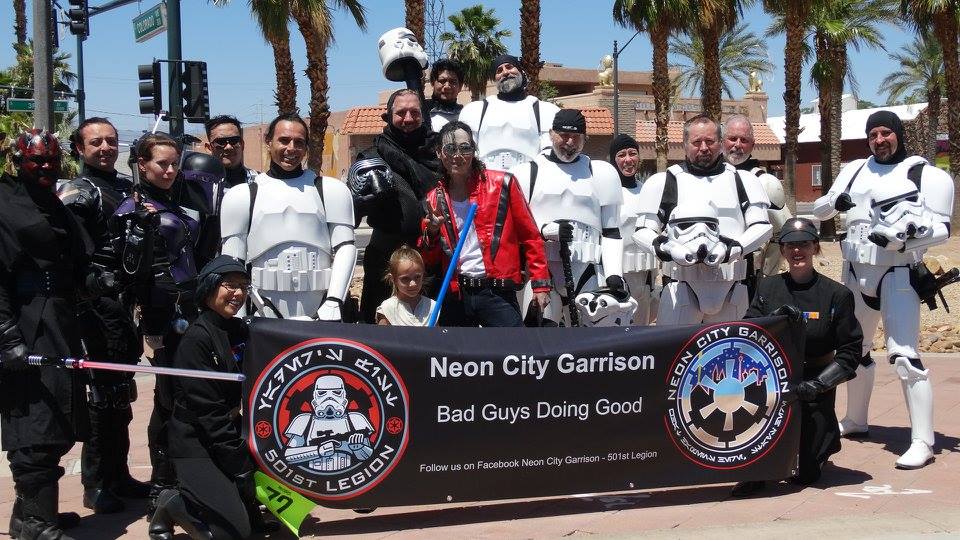 It’s been a glorious Miee here in the Neon City, we saw our brave troopers out and about in the community, helping to instill fear and obedience within it’s civilians in the name of the Emperor. Sadly though the local population seemed rather taken with our TK’s, and rather than cower in fear, spent more time slaping the hand of my troopers (known to the locals as “high-fives”) and taking holocrons. Although TK11953 did manage to make a youngling hide behind it’s mother, good work trooper!

The only real black spot on this Garrisons duties, was controlling the over excited populace during the Jedi known festival of “Mayza fourth”, in which the entire Garrison was deployed through out the Valley. TK11953 and TK14424 protected a wedding from smugglers and nerf hearders. There was an altercation between a patrol, and the locally known Jedi from Nar Shaddaa temple (we are still awaiting orders to clean up the remaining Jedi that escaped Order 66) at the Temple of Atomic Discovery, with the remainder of the Garrison sent to control the Dwelling of the Cerulean’s in Temple Mandalay, and guard a Capsule Storage area located in the “downtown” sector.

We also spent some time assisting the natives, in educating their younglings with Empirical propaganda, disguised as free komik flimsiplast! Soon we shall be able to persuade this planet to willingly join the Imperial Empire. Sadly, as always a few Jedi turned up to thwart our efforts, but our proud troopers won the day, and ran off the Jedi scum. On a lighter note, TI9605 and TK11953 on patrol with Juno Eclipse, visited a rescue center for tookas, after attempting to extract information from them, it was decided that they were of no use unless we could find a translator who spoke “mie’oow”. Although before the meeting, it was decided that these tookas may be of further use, so the Garrison is gathering credits to assist in the feeding and care, and has raised 830 credits so far.

Recently, we were asked by the council to subdue the populace by patrolling the downtown region, in the guise of a “Parade” to celebrate the tradition of Helldorado days. These Helldorado days, seem to invoke an ancient ritual of young men attempting to subjugate an angry bovine counterpart, close in resemblance to a Shaak, while wearing strange apparel that seemed to only provoke the creature more. Luckily we managed to avoid any interaction with either creatures, but instead came upon a dancing man wearing only one regulation glove. This man, willingly offered transportation to our troops, but the poor thing repeatedly kept grabbing his nether regions. I may have to report him to the local Garrison doctor to see if we can help.

We also spent time intermingling with this planets military divisions and their families, at a “American Patriots Fest”, I first believed that it was a spelling mistake from Galactic Basic to this planets language, and that we had been invited to feast on these Patriots. I was soon corrected; although there was some very strange meat based lifeforms presented in a crushed grass portion, which the local representative informed us were “thermogenic canines”* Speaking of canines, while out fraternizing with the crowds, we were set upon by a highly trained group of security force canines, these canines were trained to sniff out explosives, and got rather excited about our thermal detonators. Luckily for us, with a cry of “for the Empire” and a hand full of pika, TK51170 sacrificed himself so the rest could get away.

We recovered what was left of him, and he is currently in stasis in a Bacta tank, and we look forward to him rejoining our ranks very soon. The remainder of the month appears to be quiet, but we shall update the report if anything new occurs.

*I have been recently corrected, that they were established as “hot dogs”