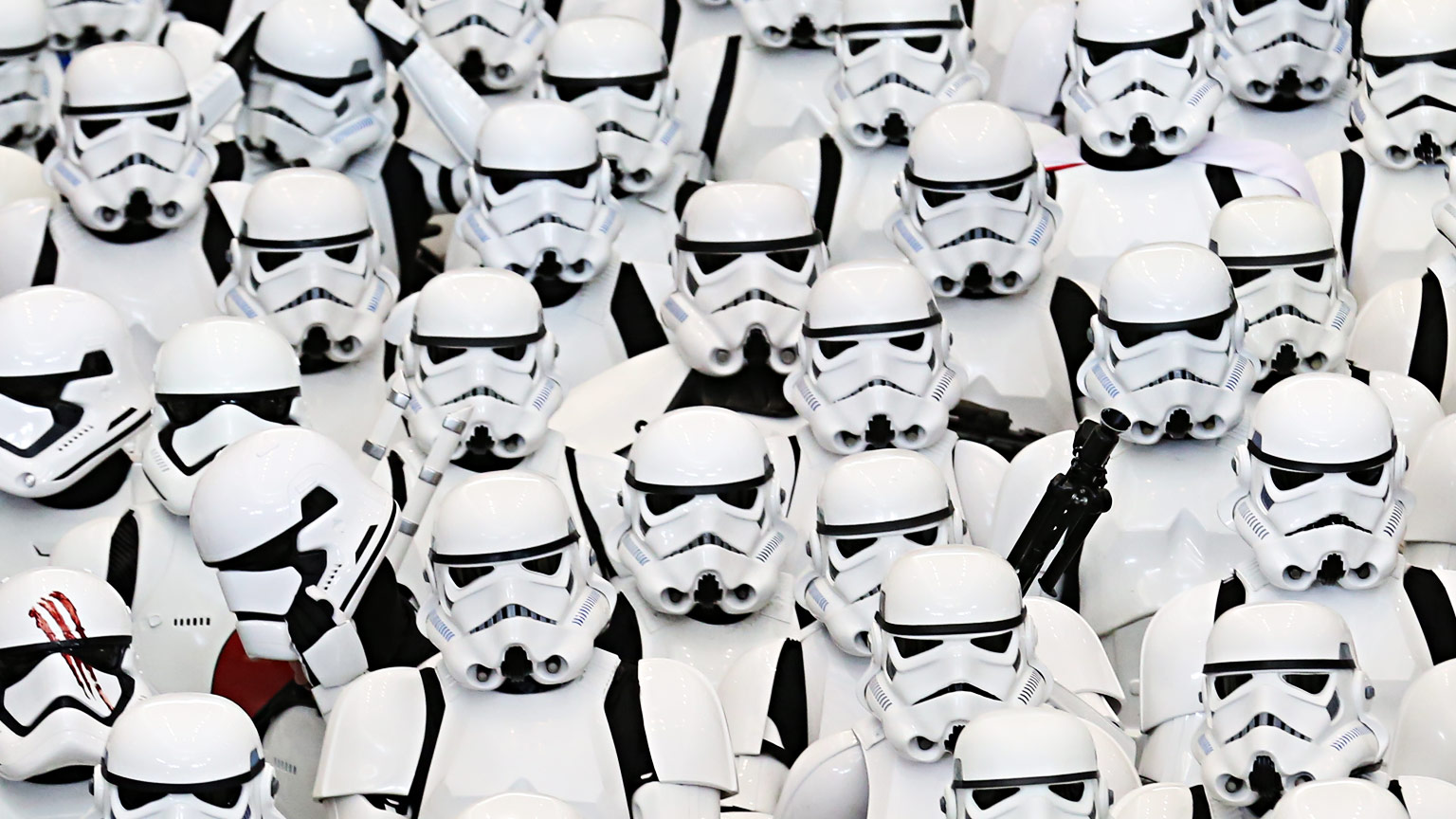 Star Wars: A New Hope is celebrating its 40th anniversary, but it’s not the only important milestone to raise a glass of blue milk to in 2017. This year also marks the 20th anniversary of the 501st Legion, a.k.a. Vader’s Fist. The costuming organization stretches around the globe with more than 10,000 active members (the number jumps to over 18,000 once you factor in retired or inactive members) who put on helmets, capes, and hats to troop at hundreds of events annually. It all started with one man, founder Albin Johnson.

Back when Johnson started gathering his first troops in 1997 via his website, Detention Block 2551, he couldn’t imagine his idea of getting people to dress as stormtroopers for fun expanding into the 501st Legion we know today. “In your fanciful dreams you hope for that,” Johnson says. “But as you grow up, you stop believing in daydreams being real, but you always have dreams. You always have a concept or horizon you’re shooting for. I never consciously quantified where we would be or where we would hit our peak. If I could have hit a hundred stormtroopers we could get all in one place, I would have thought that was a pretty big deal.”

It’s quite the accomplishment for a guy in South Carolina who wanted to start a club to meet people. When he attends events like Star Wars Celebration or conventions, Johnson’s surrounded by kindred spirits. That was his goal along. “I wanted to be able to go to conventions and feel like I had a group to hang out with, even if it was people that I never met before,” he says.

Johnson emphasizes the idea of being connected. He says he was thinking about organizations in the past that had members who knew about each other and could exchange a secret handshake. Wearing stormtrooper armor isn’t as subtle as a special handshake, but the costume aspect does cement bonds. “We wanted something where there was a sense of fraternity, camaraderie. It’s having fun and feeling good while you’re doing it that brings people back [to trooping]. They want to have the thrill of being an Imperial stormtrooper, and I know from 20 years experience, it’s best when there’s 20, 30 other stormtroopers around.”

Celebration II in 2002, five years after the 501st Legion began, marked a turning point for the organization. They set up a meeting with Mary Franklin. “I’ll never forget just how nervous I was that this was an actual, bonafide Lucasfilm employee,” Johnson says. “I really wanted to make a good first impression and I wanted them to realize what the intent was behind everything.”

But Johnson must have made a good impression because Franklin and Steve Sansweet put their trust in the 501st and had troopers bolster the security efforts simply with their presence. The group was especially helpful in the Indiana Convention Center’s Sagamore Ballroom, where a sneak peek for Attack of the Clones was shown a few times.

The event ended with Lucasfilm and the 501st beginning to work together. “I really think that was a very maturing point in our history because Mary and Steve saw that we could do something responsible, productive, and professional. Everything I had been saying just a couple of days before carried some weight because everybody conducted themselves in a very good manner. I think that’s where our relationship with Lucasfilm started to really coalesce,” Johnson says.

As the 501st Legion continued to increase its ranks, Johnson had to figure out a system to maintain the community aspects of the group and allow for growth. The idea of creating garrisons and figuring out the officer hierarchy didn’t come together easily. “There was a very big challenge in making sure — what you want is a sense of proper scalability in any organization. You want the scalability that, in this case, has to work really well with the fictional concept of a military organization, for lack of a better term. You want to scale it so that you have titles that both make sense and evoke the proper emotion of respect or command or whatever. But you don’t truly want a totalitarian structure, and you don’t want such rigid command structure that people feel shut down or looked down upon.”

They had to factor in demographics and how much members were invested in their local communities; that’s where the idea for garrison subunits came from. Johnson stressed they’ve had to be prepared to keep a flexible and fluid structure while still keeping said structure. While they make concessions when necessary, the garrisons are a cornerstone. “We built the garrisons as the backbone of the Legion because that should be your real home. We all get stronger as garrisons pitching into the main flag, but it’s your home garrison that you work hardest for,” he says.

Johnson’s still very involved in the various facets of the Legion, whether it’s answering questions about garrisons and units or donning armor. He’s owned three sets of TK armor and one set of Boba Fett armor over the years. A lot of what he does every day involves talking to members. “I’m always popping in and out, answering questions. Honestly, I think people don’t realize the amount of time every day I spend in either e-mails, Facebook chats, some kind of IM with regular members — especially folks that need advice, or want to say hello, or want guidance on a problem. I try and direct them to the right officer to take care of that. But an enormous amount of time, I spend just talking to people and there’s so much value in that.”

Looking forward and imagining how the group will continue to grow in its next 20 years, it’s likely Johnson won’t stop keeping busy anytime soon. The 501st recently honored their 20th anniversary with a huge bash at Celebration Orlando, which Johnson loved. “The party was, I think, one of the purest expressions of the original fun goal that I had in mind and just standing around watching people having a good time and feeling that energy. I think everybody will be doing something in their own way this year to mark the 20th,” he says.

This article was borrowed from www.starwars.com written by Amy Ratcliffe as part of the Galactic Costuming feature that highlights members of fan groups from around the world who, literally, wear their love of Star Wars in the form of trooper armor, rebel pilot flightsuits, and much more. It was originally published on May 31, 2017. To access the article please go to Starwars.com